Services for Dr. Hook in Austin will be held Sunday, September 8th, 5pm at St. Edward’s University’s chapel followed by a Celebration of Hook aka a “Hookabration” in the Maloney Room inside the Main Building, 3rd floor on SEU’s campus (look for the tallest, red-peaked building).

In lieu of flowers/plants of any kind, please consider a tax-deductible donation to Hook’s legacy, The Dr. Hook Wild Basin Endowment, instead:  http://bit.ly/1KR8YDv  (Choose OTHER for donation then type in HOOK ENDOWMENT) 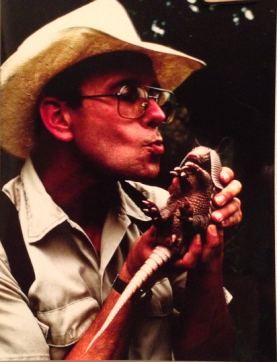 Allan William Hook— known to the masses as “Hook”—passed away at his home at age 59 on September 3, 2013.   Surrounding him were his family and friends who gently guided him through to his end here.

Hook was born on November 17, 1953, in Quincy, Massachusetts, but spent most of his childhood in Fair Haven, New Jersey, where he excelled in school science fairs and achieved the rank of Eagle Scout. Summer days spent as a lifeguard at Sandy Hook beach on the Jersey shore would help shape him, physically with a trim physique that he maintained with daily laps in the pool, and spiritually with a love for the sand and salt that later led him on many fishing junkets to Port Aransas, Texas.

But it would be wandering in the wild with his mother on nature walks that ultimately inspired his passion and lifelong love for natural science. Hiking through creek beds for fossils and taking the time to stop and turn stones and leaves in search of bugs fueled his curiosity about the natural world.  He embarked on a journey of learning that began at the University of Maine (Orono) where he received a bachelors in biology. Hook obtained a masters in entomology and zoology from the University of Georgia (Athens) and under the direction and guidance of the world-renowned wasp expert, Howard Evans, he completed a doctorate in zoology and entomology from Colorado State University in Fort Collins.

Academia led him to Austin, Texas, where Hook taught at the University of Texas and then as a professor at St. Edward’s University, where he spent over 25 years teaching evolutionary biology to undergraduates. His research focused on the social behavior and biodiversity of solitary wasps.  Hook spent much of his time roaming the fields and woods of Texas collecting insects, then collaborating with colleagues on research at the Brackenridge Field Laboratory on the West Austin shores of Lady Bird Lake. He also enjoyed several sabbaticals in the rain forests of Trinidad, Honduras, and Brazil collecting and collaborating with fellow biologists and smuggling home fiery homemade hot sauces. For his peers, he was a source of respected research and knowledge, and if they were lucky enough, a hilarious companion for collecting trips into the wild.  He was dependable as a loyal friend and an endless source of ribald jokes muttered from an infectious smile.

In addition to a large body of published research, Hook had the honor of discovering three new species of insects which now bear his name: Nemomydas hooki (fly), and two, solitary wasps—Solerella hooki and Pseudopolis hooki.

In 2009, Hook married Rosemary Guzman (a non-bug person), and as any good hymenopterist would do, he took his wife on a honeymoon to the jungles of Chiapas.  Together, Hook and Rosemary created the Dr. Allan W. Hook Endowed Wild Basin Creative Research Fund to support his reverence and study of nature.  This fund provides fellowships to any student in the world interested in conducting creative research at the Wild Basin Preserve in Austin, Texas.

Hook’s ashes will be spread in Texas and in the countries of Trinidad and Australia.

Services for Hook in Austin will be held Sunday, September 8th, 5pm at St. Edward’s University’s chapel followed by a Celebration of Hook, a “Hookabration” in the Maloney Room, 3rd floor of the Main Building, on SEU’s campus.  All are welcome.

As an advocate of sustainability, Hook’s final request was to encourage a donation to the Hook Wild Basin Fund in lieu of flowers/plants.  You may make that tax-deductible donation to the Dr. Allan W. Hook Endowed Wild Basin Creative Research Fund at http://bit.ly/2lEHKyW