Allan and Rosemary Hook, Lancandon Jungle in Chiapas, Mexico:  Allan took me to the jungle for our honeymoon.

Four months after Hook and I married and I’d moved out of my spacious, comfy, pest-free home and into his eclectic, south Austin insect-friendly house, I cheated on him.

My betrayal was not of a sexual nature but it was a broken vow nonetheless or at least that is what Allan would have had me believe.

The evening Hook discovered my disloyalty was the only time in our marriage that my husband presented his cheek instead of his lips for our good-night kiss before bedtime.

How It All Went Down

Before I created my career services practice, Hook and I worked at the same university which is about a mile from the Hook House.  Since Allan was diligent about keeping to a normal work schedule, he usually arrived home before me.  This meant that any notes left in the mailbox or at the front door, he saw first. In retrospect, it was a tactical error on my part not to anticipate that yes he would eventually find me out.

I walked into the house that Monday evening (why did everything in our house happen on Mondays?) and saw Allan sitting at the dining room table with a queer look on his face.  It was as though his lips couldn’t decide if they wanted to smirk or to snarl.

His normal greeting was always, “Hey babe,” except that night he said only: “Do you have something you want to tell me?”

I half smiled as I walked over to give him his hello kiss, but I didn’t answer because I didn’t understand the question.  As I leaned in, he leaned back and pushed a school bus yellow, 3 x 5 card towards me.  It was addressed only to me.

“How long has this been going on?” he asked.

I hesitated but only for the briefest of seconds as I crossed my arms in front of me.  “A couple of months,” I said.

“How many times has he been here?”

He stood up then and started to pace. At first, he was muttering under his breath stuff like, “I can’t believe you would do this to me,” and I will admit that yes, my heart did beat somewhat faster because I’d been caught in a lie by omission, but I was not going to stop what I had started.

And that yellow card that he found in the doorway?  It was a notice from the pest control service that read:  We sprayed! or We’re coming!  Something to indicate that they’d been there, more than once and that they’d be back according to schedule. I’d ordered the service months ago. Yes, I coordinated a time when I knew my husband would not be home. Yes, I hid the information from him. Why?  Because even after one of those revolting, flattened body, lightning-fast, shiny brown bugs tried to crawl onto the sofa with me one evening while we watched a movie, even then all Hook did was grab it with his bare hands and toss it outside.

But he wouldn’t.  How do you reason with such a man? My purist of an entomologist would not kill a Texas tree roach.  He actually tried to explain to me why he wasn’t killing it.  I put up my palm to ward off any further conversation. It’s a wonder my nostrils didn’t expand to three times their size, I seemed to flare them all the time in those first few months of marriage. But he’d found me out. Well, so what. He was still pacing in the living room but now his voice was somewhat elevated.

“I can’t believe you did this,” he said.

“Oh come on …” I immediately replied.

That’s when he started tossing his arms up and down in the air saying, “You’ve embarrassed me in front of my colleagues!” and “I’ll never be able to hold my head up again.”

Whatever smile was beginning to form on my lips, it left my face altogether. I tried to make light of the situation by snorting, “It’s not like you found out that I’d posed nude or something.”

“That would have been better!” he snapped and I realized, My God he is serious.

Hook’s face was darker than normal and he wouldn’t look me in the eye. I had gone against his wishes and done the unthinkable — I’d brought insecticide into “his” house.

“There is not an infestation!” he yelled and now it was my turn to give a queer look.

Apparently every time I said the word, “problem,” Allan interpreted this as an accusation that there was an “infestation” and damn it, he was the entomologist in the house!

“You have to cancel them,” he said into the silence of the room.

But still, he would not look at me.  He was either too disgusted or too offended. It was hard to tell which, but he was obviously insane if he thought I was going to live with those hideous things crawling inside the house never knowing when one might scurry across my line of vision or – gross – across me.

My head started shaking back and forth, back and forth and now I was the one pacing. “I.will.not.cancel.them,” I gritted my teeth as I spoke, turning to face him, willing him to meet my eyes, but he refused.

“It’s either me or the roaches!” I screamed.

Hook half turned to flash me a look but he never responded.  He left my ultimatum hanging in the air between us while my nostrils flared.  Years later when I asked him about it, he said I was lucky I’d stomped upstairs afterward because he was so mad at me that he was “this close to choosing the roaches.”  He used his index fingers to demonstrate how close — the length of a cucaracha – I had come to losing my place to a bug.

Hook stayed wounded that entire week which was interesting to watch because he wasn’t really someone who could hold a grudge. He still kissed me in the mornings and hugged me at night but if I tried to snuggle, he’d say in a pouty voice, “I’m still mad at you.”

The following weekend we ate dinner at Jack and Beryl’s, two good friends of Allan’s and two scientists whose opinion and respect he valued.

“Don’t say anything about the pest control to them,” he warned me on our drive over.

It seemed like all I’d done since Monday was roll my eyes and shake my head.  I’d spent the last five days trying to explain to him that if he took a poll at work, he’d probably find that the other biologists had a pest control service, too, unless they lived in the vanilla suburbs.  I don’t know if he ever asked any of his work colleagues, but we did find out from Beryl that yes, of course, she sprayed and soaked down her home with pesticides.

The next morning Hook said, “Okay, you can keep using them,” but he insisted on being at the house the next time the pest guy showed up.

I’d already advised the service not to touch the wasps’ nests but Allan wanted all nests including spider webs and ant hills untouched and absolutely no spraying outdoors, only indoors.  Save the bugs; kill us, I guess. 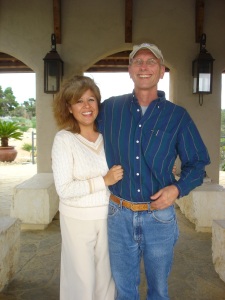 At our wedding rehearsal, 2009: Rosemary and Allan Hook.

Earlier this year after I moved back into the Hook House, I reinstated pest control.  The serviceman said there was a standing order not to disturb the wasps’ nests, said he’d never had an order like that before.

I don’t think I could ever kill a wasp even if an entire nest was dive-bombing me.

“And what about the spider webs?” he asked.

I looked up toward the ceiling and yelled, “I am not responsible for providing food for the wasps!”

Then I turned to the guy and said, “Get rid of the spider webs.”

I love telling this story because I’d always been in awe of Hook’s singular focus on nature.  But it wasn’t until we’d gone through this pest clash that I could truly appreciate the depth of his emotional commitment to protecting the environment especially the one where he lived.

But what did I expect?  The man didn’t even urinate in his own home.  He relieved himself in the backyard. I would stand on the patio with him each time so I could ask, “Now why do you pee out here again?”

He’d always mumble something about nitrates and how it saves on water so that within the first year of our marriage, I’d adopted all on my own an, If it’s yellow let it mellow rule for all three of our commodes.

Such a unique man.  I miss him so much.

7 thoughts on “Hook vs Pest Control”