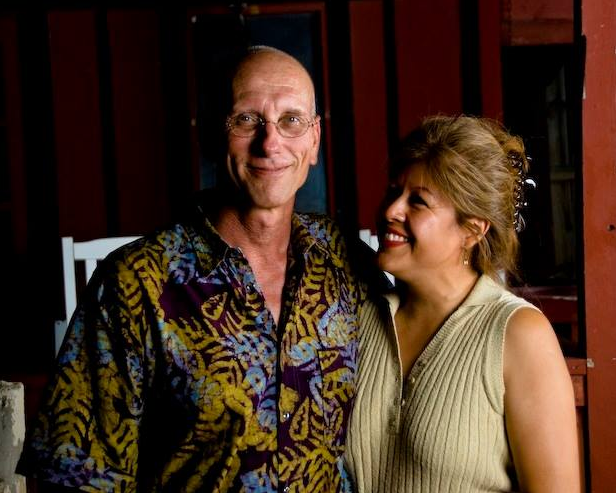 We were at a colleague’s Texas wedding, in the backyard of Hill’s Cafe on South Congress in Austin. This was our first night out since his return from seven weeks in the jungles of Trinidad, his annual summer research trek.  Before he left, I believed that I would welcome the break from the exhaustive work of dating so as to have more time to study for my master’s program, to organize outings with girlfriends, to wear glasses instead of contact lenses. Missing him never even occurred to me, but then I pined. Oh Lord, how I pined, struggling against a tropical depression, almost worried that I might be physically sick.

The melancholic resistance to waking up in the mornings for my normal four-mile run with friends only made it worse. Two weeks in, I chastised myself out loud, “Oh damn” as I stood there shaking my head slowly, realizing the obvious: I was in love with him.

I’d nothing against love and in fact welcomed the high, except he was in rubberband mode, floating in and out of the relationship, not with his presence but with … What? Emotion, interest, commitment; wait, who said anything about commitment, or marriage, or love?

He did. Two weeks before he left Texas, he whispered, “I love you,” (first; thank god). I repeated the words but I was hesitant, always afraid of losing myself in a relationship. I kept only toes in, sometimes legs, but never my whole self.

Of course, Allan was different. Now that he’s dead, I wonder if he finally knows that it was me who made the first move, calling his office, leaving a voicemail meant to prompt a response. I expected a phone call back yet was thrilled when he walked into my office, so sure of himself this scientist, determined to do what he had come to do: ask me out on a date.

Now it was eight months later, August of 2008, and I had spent the last week pretending that I was not counting off the days until I could pick him up from the airport, a lack of appetite the only positive by-product of missing him.

“You have it bad,” I kept saying out loud to myself while secretly acknowledging, This is not good if he does not ask you to marry him; in fact, this is quite bad.  He wasn’t like anyone ever, and the lure of him left me wanting his presence 24×7. For the first time in my life, I could see staying instead of leaving, building a life together, being with only him. But, I had no idea what he felt other than that one serious “I love you” spoken months before … before he left for seven weeks, before he communicated from Trinidad by email once a week — three short sentences, sometimes only two. Each morning, my heart pumped in anticipation as I checked my email box for more communication, reluctant to send my own.

Let him do his research; give him space. Why would he need space? From me? Oh my god, is he GLAD to be away from me? And on and on and on.

Now we were standing at this wedding reception, ornamental tunes from The Gourds playing live in the background, and us sipping frozen margaritas from one of the free-flowing liquor stands placed throughout the south Austin venue’s backyard. A professional photographer roamed with his camera, stopping to ask if we would like a picture.

Before we answered, I looked at Allan as joked in reference to my father, “Will I have to ask Lou for your hand in marriage?”

A piercing sigh of relief shot into my chest while simultaneously scaring the crap out of me. He was in love, too. Oh, Thank God. Oh shit. But I did not have to decide anything today. There was time yet to figure everything out. I knew one thing only and that’s what I trusted in as a wide smile crossed my face. I looked up to the man I loved and answered the cameraman at the same time, “Yes,” to a photo of Allan and me.

For Allan, today and always